Pforzheim is the „gateway to the Black Forest“ – one of Germany’s most beautiful regions. The mountains and valleys of these uplands are just a short distance away from Pforzheim and in the evenings or at weekends you can enjoy the ski slopes, hiking trails and mountain bike tracks.

Cities like Stuttgart (home to companies such as Daimler-Benz, Porsche and Bosch) and Karlsruhe (companies such as E.G.O. Blanc and Fischer, the dm-drugstore chain, Fiducia IT or the Karlsruher Institute for Technology) are just half an hour’s train journey away. The world famous Heidelberg with its picturesque historic city on the Neckar or Strasbourg (home to the European Parliament) on the French side of the Rhine are in close proximity and a must when staying in Pforzheim.

With its 120,000 inhabitants Pforzheim is a vibrant hub in the Federal state of Baden-Württemberg and has developed a multicultural and liberal-minded climate – thanks to the many immigrants from Southern and Eastern Europe and other continents. At the junction of the rivers Enz, Nagold and Würm languages, cultures, customs and culinary traditions from all over the world can be found and are a part of daily life for Pforzheim’s citizens. Vivacious districts, such as the Northern part of the city, are a popular venue for recreational activities and the local nightlife, particularly for young people and students.

Pforzheim’s economy is characterised by jewellery making. 75 % of Germany’s bijouterie is made in the city with the byname “Gold Town”. Other important and export-oriented branches are metal working, mechanical engineering, precision technology, knowledge and information oriented services, printing technology and the mail order business. High-performance trade, many medium-sized companies and an extensive retail sector make Pforzheim an ideal place to gain work experience in a future-oriented company.

As well as varied recreational and sport facilities, Pforzheim has a pronounced cultural life: cinemas, music clubs, discos, museums about jewellery making and the city’s history and the local theatre won’t allow boredom to ensue in your free time. Pforzheim’s internationally renowned School of Design, Technology, Economics and Law attracts students from all over Europe.

In 1607 Pforzheim was first mentioned in an historic document from Emperor Henry IV (Holy Roman Empire). In 1945, toward the end of the Second World War, 80 % of the city was destroyed in an allied aerial attack and approximately 18,000 people died. The city’s redevelopment mainly took place in the fifties and sixties.

The city administration informs its citizens and guests about current events, services and economic developments on its website:
http://www.pforzheim.de/en.html

You can find more information about the business location Pforzheim on the Northern Black Forest Chamber of Industry and Commerce’s website:
http://www.nordschwarzwald.ihk24.de/english/productlabels/economic/

You can download short English information about Pforzheim and its attractions at the tourist office:
https://di0pda1wg490s.cloudfront.net/fileadmin/user_upload/wsp/tourismus/Come_and_see_Pforzheim__english_.pdf 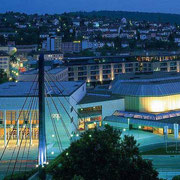 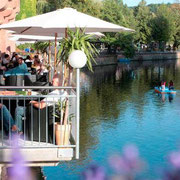 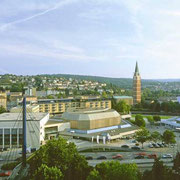 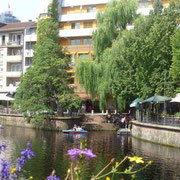